The Cross-Cultural Foundation of Uganda (CCFU) is committed to supporting and promoting the cultural and other rights and wellbeing of indigenous minority groups (IMGs) in Uganda. In our experience, a major challenge hampering the access and realisation of the rights of IMGs is the lack of clarity on their distinct identities in terms of traditional social setup, economic 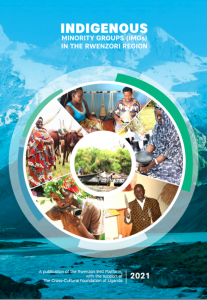 activities, cultural practices, and traditional governance structures. In some cases, such information is inadequately or inaccurately understood by actors beyond the respective community, which often results in perceptions and acts of marginalisation and dismissal of some communities as less developed than their neighbours, or as sub-sets of their more populous neighbours.

To address this challenge, the Rwenzori IMG Platform with the support of CCFU documented some aspects of the cultural identities of nine IMG communities in Rwenzori. The Platform documented aspects of all nine of its member communities, which include the Basongora, Banyabindi, Bakingwe, Bagabo, Babwisi, Batwa, Bavanoma, Bamba and Batuku. The documented profiles indicate their cultural, political, economic setups, with some distinctive linguistic features. It is anticipated that understanding the cultural and other distinctness of the respective groups will strengthen their pride in their traditional cultures, and enable majority communities to understand them better and support their social development aspirations.

During the launch and dissemination event of the publication, representatives of the local governments of Bundibugyo, Ntoroko, Kabarole and Kasese; as well as those from the majority cultural institutions of Rwenzururu and Tooro were invited and interfaced with their IMG counterparts. The IMGs tabled several of their concerns that need to be addressed by and with both the local governments and cultural institutions. These included concerns relating to access to and expression of cultural rights such as language (e.g., in the thematic curriculum) and cultural sites; inclusion in government programmes and equitable access to opportunities such as jobs; and marginalisation of their cultural identities through derogatory names and the denial of their cultural institutions from asserting themselves and thriving. The local governments and majority communities expressed a strong need and willingness to always dialogue with IMG communities for inclusion and fostering co-existence.

We invite you to read the publication, Indigenous Minority Groups (IMGs) in the Rwenzori Region.